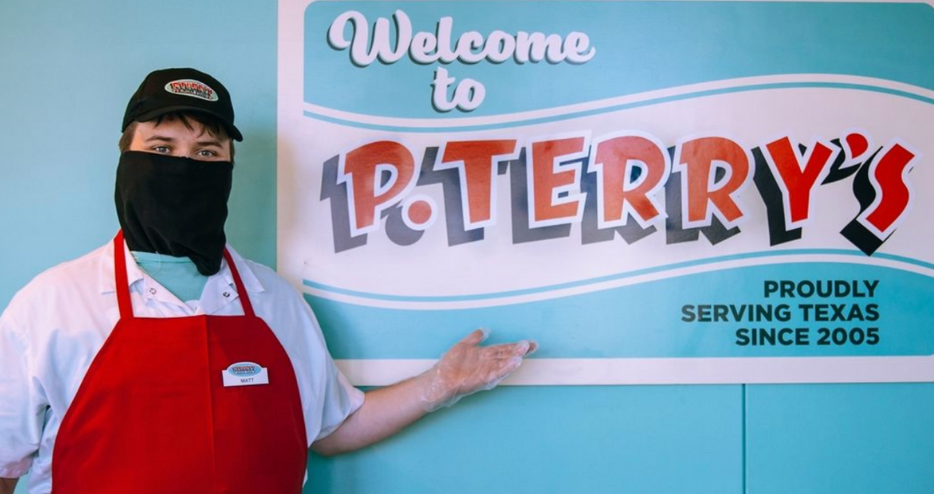 P. Terry’s Burger Stand, a family-owned burger chain based in Austin,Texas, today announced a new minimum wage of $15.00 per hour for all of its full-time employees, resulting in an on-average 25 percent pay increase in a state where the minimum wage is $7.25 per hour. The wage increase went into effect during the first pay period of January 2021 at all 20 P. Terry’s Burger Stand locations, its centralized commissary kitchen and its Taco Ranch location (a single-location, all-natural taco stand), and makes the iconic Central Texas company one of the highest minimum wage, quick-service restaurant concepts in the United States for full-time hourly employees.

Since the inception of P. Terry’s Burger Stand in 2005, the Austin-based company has been dedicated to an ‘employee-first’ approach founded on respect and empathy for all. Beyond offering premium all-natural products served at affordable prices, P. Terry’s has long paid it’s 900+ employees above industry standards to provide a reasonable living wage and foster an environment that supports employee wellness, access, and development.

“Everything P. Terry’s does is rooted in respect for our employees,” said Todd Coerver, P. Terry’s Burger Stand CEO. “As the cost of living continues to rise across Central Texas, we’re trying to do our part to ensure a decent and respectable quality of life for everyone on our team. While the business economics around such a wage increase, especially during a pandemic-driven down market, is challenging, it’s just the right thing to do. Our crews work hard and they deserve it.”

Coerver, a 25-year veteran in the quick-service category, has been at the helm of P. Terry’s as CEO since March 2019. He was specifically brought in to lead the brand through an accelerated growth phase while protecting and preserving the company’s unique culture. Coerver has been instrumental in assisting founder, Patrick Terry, in planning a significant growth strategy that prioritizes an employee-first approach.

Despite the challenges of a global pandemic, P. Terry’s hit 40% employee growth in 2020. Over the last 10 months, the company opened five new locations throughout Central Texas, providing for 250 new jobs in total.

P. Terry’s recently opened its 20th location in Pflugerville, Texas to start the new year, and is positioned for continued growth and additional hiring, with plans to open three locations in San Antonio and one more location in Austin by the end of 2021. To help support the additional locations, P. Terry’s will also expand its headquarters and commissary kitchen in Austin this year.

In an industry significantly impacted by COVID-19 and known for standards that have generally undervalued and underappreciated employee wellness, P. Terry’s has prioritized wellness for its employees and its community. Throughout the pandemic, P. Terry’s founders, Patrick and Kathy Terry, personally and continually gifted every P. Terry’s employee grocery gift cards and cash to thank its essential workers and support them during the devastating economic downturn. Further, P. Terry’s continues to encourage and incentivize its employees to participate in community and civic causes, including paying hourly wages for volunteer work and providing paid-time-off for employees who voted early during the 2020 presidential election.

To continually support the Central Texas community, P. Terry’s also participates in quarterly “Giving Back Days”, when all profits from a set date are donated to a selected charity in the Central Texas area. To date, P. Terry’s has donated more than $1.2 million to a variety of local nonprofits and charitable organizations, including Health Alliance for Austin Musicians, CASA of Travis County, Austin Pets Alive!, Statesman Season for Caring, Austin Smiles, and more.

“When we established P. Terry’s fifteen years ago, we set out to create a concept that cares for its crew, customers, and community,” said Patrick Terry, founder and co-owner of P. Terry’s Burger Stand. “With something as simple as offering a quality burger at an affordable price, we’ve been able to build a team that takes great pride in delivering a special experience to our guests. They work hard, they are the reason for our success, and they deserve to be compensated accordingly.”

A leader in the quick service dining industry, P. Terry’s bold wage increase serves as a model for raising national pay standards across the industry and supporting fair and reasonable living standards for everyone. Along with the on-average 25 percent minimum wage increase, P. Terry’s provides a multitude of unique benefits and programs for its employees, including a tenure bonus every December, interest-free loans, and two bakers on staff to bake each employee the cake of their choice on their birthday.

P. Terry’s has been family-owned by Texans for Texans since 2005. Known for their focus on all-natural ingredients and scratch cooking, they serve fresh, never-frozen black Angus beef (free of hormones and antibiotics), chicken patties formed in-house from whole chicken breast, and fresh-cut fries made from all-natural Idaho potatoes - free of trans fats and hydrogenated oils. P. Terry’s proclaimed mission is to, “always provide fresh, high-quality food at an affordable price while taking care of our customers, crew, and community every chance we get.” Open for breakfast, lunch, dinner, and late-night, the menu also includes egg burgers using cage-free eggs, fresh-cut breakfast potatoes, fresh-baked banana bread and oatmeal chocolate chip cookies, hand-spun milkshakes and vegetarian patties made fresh daily from a proprietary recipe.

Apart from its fresh food and commitment to giving back, P. Terry’s is also focused on ensuring their employees' well-being through opportunities to grow with their business, paying above industry standards, offering interest-free employee loans, and even having two bakers on staff to bake each employee the cake of their choice on their birthday.